Everything you need to know about its origin, character and morphology.

Sculptures in the Garden of Plants in Toulouse.

The name originates from the dog breed Molossus which lived in c. 700BC.

He is one of the oldest French dogs and there are several theories about his origin:

One source says that the Assyrians (a nation that historically lived in central and north Mesopotamia, an area now known as Iraq) used the Molossers as guard and hunting dogs, which is portrayed in paintings and carvings from this time. One of the first written descriptions dates from 326BC and describes a large dog with stubby, broad teeth. During archaeological digs in China, Tibet and India bones from this breed were found. The breed was also mentioned by the historian Alexander the Great (356-323BC). During the campaigns of Alexander the Great these dogs moved from Mesopotamia to Epirus (historical geographical area on the west of the Balkan peninsular which today partly belongs to Greece and partly to Albania). Epirus was a roman province. This is one theory of how these dogs were able to spread through the roman empire of that time.

Another source describes a large dog which has as firm a bite as three hunting dogs put together. This was a description of the Alano. I have found two variations of Alano:

1) The name „Alano“ was probably taken from the tribe of Alans (Alan: greek Alanoi, latin Alani, probably from „Al“ great, strong, divine and the Iranian suffix „an“ possibly also from the Iranian Aryan). The Alans were an Iranian nation. During roman servitude many Alans came to Gaul and Britain where they also founded settlements. Even in the early Middle Ages many French and Breton nobility were proud of their Alan-Roman origins.

2) Towards the end of the middle ages on the Spanish mainland there evolved a type of dog widely used as it was an uncompromising hunter of game (deer, bear, boar) a dog of war, and herder of cattle, a guard and watch dog. During the conquest of South America this Spanish mastiff arrived on the Canary Islands. These Alanos (Spanish for mastiff) were used by the conquistadores as dogs of war. Many of these dogs remained on the Canaries where they continued to be bred. On the Canaries they lost many of their typical functions such as bull fighting, the work as beater and herder, and hunting game, so that they almost exclusively were used only as guard dogs.

A third theory is that the Molossers come from the Molossides. This breed is a Greek-Roman fighting dog.

In the past the Dogue de Bordeaux was used as guard dog, drover, hunting dog and house and watch dog. These varied uses show that this breed is a very intelligent, fearless and strong nerved dog, which is loyal to his owner and the family.

The Bordeaux Mastiff was first 1863 called its present name of „Dogue de Bordeaux“during the Paris Dog Show Jardin d’Acclimatation. The cataloguing of a breed of dog in France was more significant than the show. It is thought that as the winner of the show, called Magentas, came from the Bordeaux region so the Bordeaux Mastiff got its name.

There are probably a vast number of other theories about the origins of the breed. In my opinion the origin plays a minor role. It is only important that we have the Bordeaux Mastiff and I am delighted to own such wonderful dogs and have such joy in doing so.

This article contains information from various sources. As I am not a researcher, I ask you to forgive any errors. 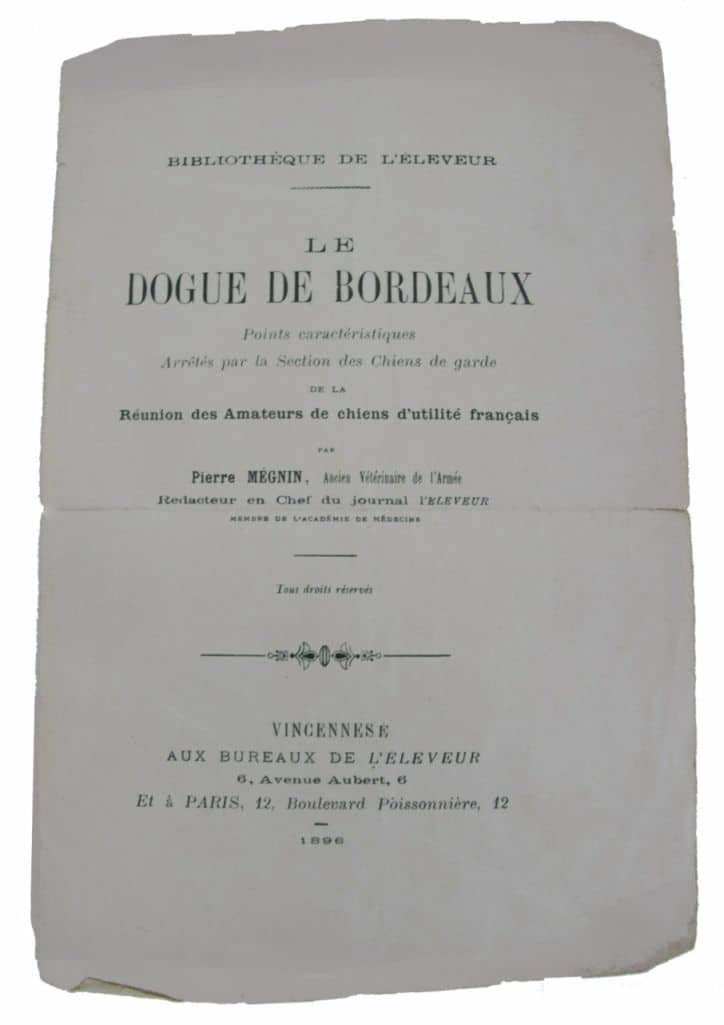 You want to know more about our litters and our dogs?

Leave your contacts and our managers
will contact you soon.

Your message is successfully sent...